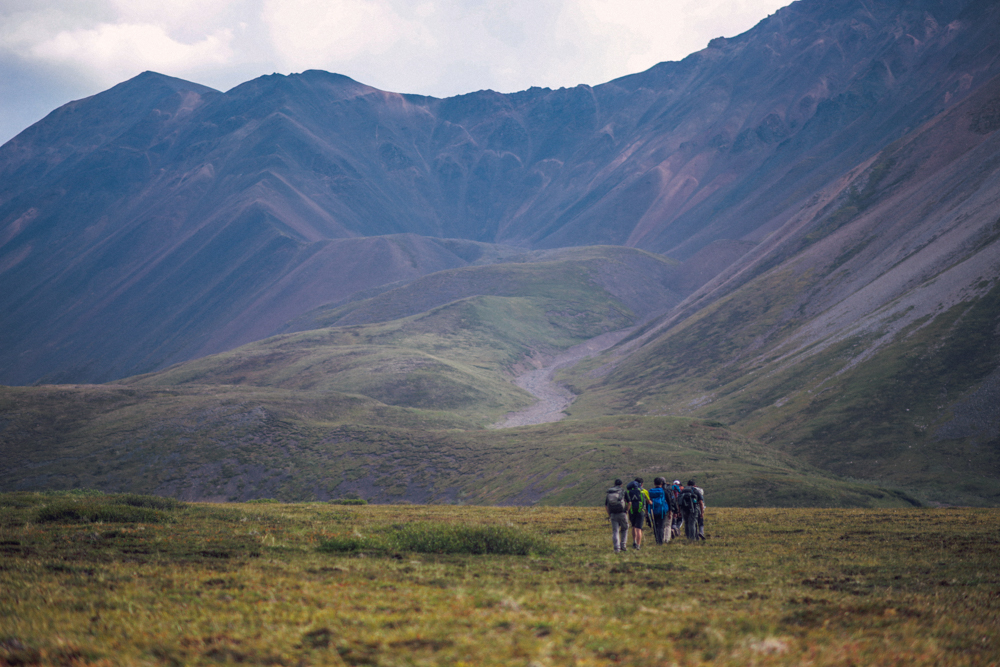 The backdrop for this adventure — Wrangell-St. Elias National Park — is the least visited national park in the United States, and it’s where our group of teen adventurers found themselves 10 miles into the backcountry. Beating the unbelievable odds, they spotted a mountain lion (extremely rare in Alaska), as well as a number of Dall sheep and other wildlife. And after just a few days of trekking, the sight of arctic ground squirrels on the tundra, moose, ptarmigans, as well as glaciers and glacial lakes became almost commonplace.

So common were the ground squirrels that one sneaked away with one of NCOAE field instructor Matt Evans’ socks and dragged it half way into his den. Apparently the local rodent was intent on having a sleeping bag of his own.

As the teens gained time on the trail and experience in the Alaskan backcountry, they each confidently packed and carried their backpacks like pros; everything they needed to live from day to day in one backpack each. That is a far cry from the multiple heavy suitcases most of them arrived with – and had to leave behind until the trip was over. Packing up camp each morning eventually became routine, as though they had established their camp habits years before.

They backpacked their way over and through rocky streams, tundra, and reached high mountain passes by accomplishing steep ascents — some over a mile high. Trekking through glacial valleys and into high-walled slot canyons, the group spotted skeletal remains of large animals more than once, reminding them of the dangers always present in wilderness. The payoff was well worth the risk, with views of a landscape that included hearty alpine plant life, jagged black mountain ridges, rock and snow glaciers, and hiking through beautiful green valleys filled with fluffy white clouds.

The participants discovered new levels of confidence during their 20-mile trek. The experience they gained in reaching group goals, interest in contributing to their fellow adventurers wellbeing and in that of their home communities was evident by trip’s end.

Among the skills acquired during this adventure:

One student was prompted to write to us about the experience, saying, “Sixteen days in Alaska were sometimes very tough, but after all was done, I felt confident and accomplished. My parents and friends have already noticed a change in me, and I feel that way too. Thank you for the amazing trip and the best instructors I ever had in my life.”