As you’re probably aware, we here at The National Center for Outdoor Adventure & Education (NCOAE) do a lot more than just organize backcountry trips for teens, Outdoor Educator courses for outdoor education industry professionals, GAP Year Programs for college-age students, and wilderness medicine and EMT training for anyone desirous of such certifications.

For certain, our wilderness outings and trainings are our bread and butter, focusing as they do on three-day to three-month adventures targeting everything from mountaineering to surfing and certification-granting trainings ranging from Emergency Medical Technician training to Leave No Trace ethics.

But among our tasks — and admittedly it’s more of a rewarding commitment than a task — is giving back to the outdoor education and adventure recreation industry what was so freely given to us. Our aim has always been to serve as a clearinghouse for information related to our profession, and one of the ways we do that is promote and participate in select outdoor industry meetings, markets and conferences.

And by promote, we mean we go the extra step to keep our industry peers up to date on happenings that affect our employees, our clients, our profession and of course, the environment. We want to get the word out about these upcoming and most important outdoor shows, seminars and confabs.

Having said this, what we offer below is a list of upcoming outdoor industry conferences and events that you might consider attending. Here’s what the calendar looks like for the rest of 2018 and the beginning of 2019: 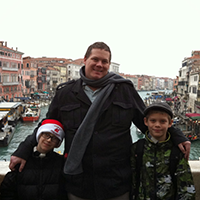 We asked Chris to fill us in on the rest of his life — particularly in regard to his work at NCOAE’s Wilmington campus and his lifelong career choice. Here’s what he had to say: