There’s a Reason Why Outdoor Ed is Not Club Med

Zac Adair, our co-founder and executive director, recently asked one of our course
participants why they signed up for a particular outdoor adventure. “It was a photo that
appeared on your website of a guy on top of a mountaintop with the blue skies above the
glaciers in the background.”

Picture yourself here. It’s a common tactic in all great marketing campaigns. If after
seeing an advertisement, you can picture yourself wearing a specific shirt, driving a
particular truck, or vacationing on a cruise ship that’s making its way to the Bahamas,
then the team of marketers responsible for those ads has done their job.

Here at The National Center for Outdoor & Adventure Education — where we’re focused
on designing and guiding outdoor and adventure education experiences that promote
personal growth, professional development, and stewardship in our community and the
natural environment — we employ the same tactics. Take one look at our website and
you’ll see photographs and videos featuring real NCOAE students participating in the
very courses and trainings that we offer around the globe.

So, it’s little wonder that these videos and photos prompt our website visitors to picture
themselves on one of our backcountry adventures. But here’s the thing that may escape
such a casual or initial thought. That picture of a END_OF_DOCUMENT_TOKEN_TO_BE_REPLACED

Well, it’s official. We’ve just wrapped up and put a bow around another successful season of adventure-based programming in the Pacific Northwest, with all of our expeditions originated from our base of operations in Maupin, Ore., alongside the wild and scenic Deschutes River. 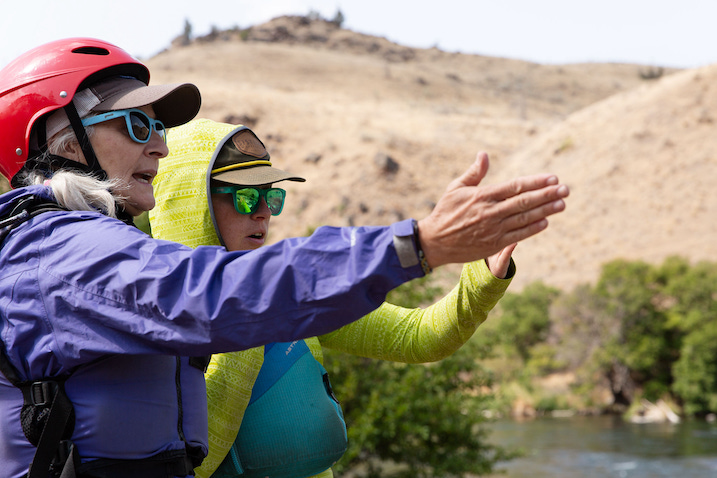 And, of course, we here at The National Center for Outdoor & Adventure Education (NCOAE) are already making big plans for next season’s explorations of the Pacific Northwest. Our custom trips feature a range of course options to fit every organization’s or adventurer’s schedule, all set against the background of some of this country’s most breathtaking terrain — the rugged and remote Cascade Mountains. During your trip, you’ll be guided through deep canyons, hike along alpine meadows, traverse cold-mountain streams, explore cascading waterfalls, and enjoy remote mountain passes.

For the 2022 season — in addition to custom programs for schools, youth organizations, and other groups — we continue to offer a range of END_OF_DOCUMENT_TOKEN_TO_BE_REPLACED

Engaging Teens in the Outdoors

Getting your child or teen to look up from their smartphone, put down their Xbox controllers, or step away from the TV can be a chore — and that’s just when you’re calling them to dinner.

Mention taking a walk around the block or joining the family on a picnic a local park and witness the wailing and gnashing of teeth.

If you look at our nation’s history since the end of World War II, you see that service men and women returned to the United States and began to grow families. These households scrimped and saved to purchase such luxuries as high-fidelity stereo systems, black and white television sets, and a second car. Most of these new items enabled folks to enjoy life indoors, or drive to the drugstore instead of walking.

Fast forward 75 years and we find that families — and especially teens — have dozens of electronics devices at hand, each able to deliver entertainment from the comfort of their couch or bedroom.

So, how do we as families, let alone as a nation, compete with all these shiny handheld toys and devices, and get our kids out of the house and into the outdoors? When I was young, I was tossed out of the house early in the morning. I would jump on a skateboard or bike and search out the wild side of urban landscapes.

Not so today. Below, I’ve listed four action verbs that can get the ball rolling toward get kids interested in exiting their indoor surroundings.