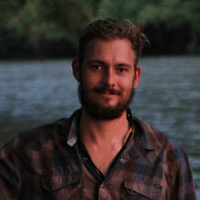 In this day and age, when practically anyone with a Smartphone can publish a video online, we tend to take a lot of things for granted. For example, consider our latest video (see below) for the National Center for Outdoor & Adventure Education (NCOAE).

At first glance, this video has all the appearance of having been created on an iPhone, but don’t be fooled. That look is intentional because while great video footage looks effortless to conceptualize and create, it’s anything but.

That’s why we’re so proud of our affiliation with outdoor and adventure videographer, Matt Evans, who also just so happens to be an assistant instructor here at NCOAE. Matt graduated from college with a pair of degrees — one in filmmaking, and the other in business administration. And while both have served him well over the years, it’s the film degree that’s proven to be highly beneficial to NCOAE.

Here’s that video he created for us, and below that is our interview with Matt, focusing on the challenges and opportunities associated with shooting outdoor education video footage:

NCOAE: What are some of the challenges of shooting video footage in the backcountry?

Matt Evans: The challenges when dealing with shoots like the ones I handled for NCOAE were numerous and varied, and included finding lightweight cameras and equipment, having the proper physical space to get the shot, dealing with weather, and making sure you have an ample supply of batteries.

NCOAE: Let’s start with the batteries. How did you manage that?

Matt: When I was planning the trips that went into the creation of the video you see above (two separate 12- and eight-day trips), I knew there was no possible way to charge or change out batteries, or upload footage from the CF cards in the camera. So I actually brought six batteries into the backcountry, along with 200 GB of memory. In order to keep the batteries fresh and not waste any space, I favored shoots that were short (15 seconds or so), rather than shooting five-minute segments. It’s pretty amazing how much variety you can capture when limiting yourself to 15-second clips. Mind you, not all of the clips were that short. But if you’re interested in conserving power and memory, that’s the way to go as opposed to keeping the camera running all of the time.

NCOAE: You mentioned ‘weather’ as being particularly challenging?

Matt: Yes. The other significant challenge to filming in the backcountry is weather. To say the first trip occurred during the rainy season would be an understatement. I’m not kidding when I tell you that it rained eight out of the 12 days we were on course, and that we averaged 1.5 inches of rain a day.

How did you manage to keep your equipment dry?

Matt: Well, as you can imagine, keeping moisture off my gear became a top priority. I had my camera bag inside of a dry bag, and all of my audio gear in a dry box. If I had shelter to stand under, I would film under that, or I would just wait for the rain to stop for an hour or so and try to get what I needed during that time.

NCOAE: And what about weight. You mentioned that as being a challenge, also?

Matt: For sure the other challenge was weight. I had to carry all my gear on my back along with food, water, shelter, clothes, etc. So I only brought two lenses, and I rented a special travel carbon fiber tripod that only weighed a pound. Having a compact travel tripod was a lifesaver.

NCOAE: How did you get the people you’re filming – in this case teenagers on an outdoor adventure education course in the backcountry – to ignore the camera and just be themselves?

Matt: Documenting live events as they happen always brings its own set of challenges. Before the trip departs, I always educate the students and instructors about what is going on, why I’m filming and what to expect. Sometimes I joke around with them just so they know the guy behind the camera is real and friendly.

However, getting people to ignore that camera is pretty easy after the first day. I just make sure not to interact with them while filming. I will usually shoot with a longer focal length (long lens) so I’m not near them, if possible. And generally speaking, if the kids were engaged in something else, they barely noticed me.

Filming interviews was always the most difficult thing because even the most talkative of kids would clam up once the spotlight was on them and only them. In order to combat that phenomena, I would just talk them through the questions like we’re talking now — real conversational, no pressure. I also made sure to conduct at least two interviews with each kid. That way, when the important stuff came around toward the end of the trip, they were already used to being in front of the camera.

NCOAE: What advice would you give to aspiring videographers who want to shoot in the backcountry?

NCOAE: Tell us about your equipment?

Matt: To keep things simple, compact and as light as possible, I brought my DLSR Canon 5d MkII, a wide lens 11-16mm F2.8, and a medium lens 24-70 2.8, along with that travel tripod containing a fluid head.

NCOAE: Let’s switch gears a bit and talk about you. How did you get into filmmaking?

Matt: Skateboarding actually. I grew up skating and I discovered that filming videos of you and your buddy was pretty appealing to me. In high school I found my dad’s only Sony 8mm handy-cam from the late ’80s. It was awful quality and didn’t even have a portable battery, so we’d have 100-feet of extension cords all over the yard just be able to film in our driveway. We shot our first two skateboard videos on that Sony, and when we got older and had money of our own, we bought a digital 8 Sony with a fisheye lens, which at that time was revolutionary!

NCOAE: If you could persuade NCOAE to take a trip anywhere in the world with you in tow to film the experience, where would you want that to be and why?

Matt: This is a tough one to answer because there are so many places where I want to travel. Probably Bali or Fiji to see some different culture and get some surf in while I was there.

NCOAE: Which movies get your vote for best backcountry flick?

Matt: 180 Degrees South, and The Art of Flight.

Tell us about your approach to the video you created for us. What were some of the considerations that went into your shoots?

Matt: Well the majority of my experience is in documentary and event cinematography, so I’ll go in to shoot with a final product in mind and maybe a loose shot list. But for the most part everything is on the fly. You learn to take advantage of locations, lighting and situations as they happen.

NCOAE: Finally, how many hours of footage did you shoot in order to create the video for NCOAE?

Matt: I shot maybe four hours of footage over the course of the 20 days in the backcountry to make the five-minute short video you see above.

NCOAE: Thank you Matt, for sharing a ton of insight and information into backcountry filmmaking. Happy trails to you, and just for the record, Cliffhanger is hands down the best backcountry flick of all time!