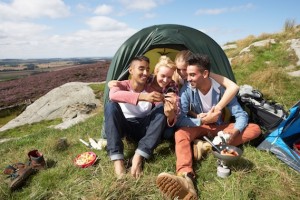 According to research we’ve recently discovered, children ages 8–18 now spend seven-and-a-half hours a day, seven days a week, using screens outside of the classroom. Those ages 12–17 use their phones to text message on a daily basis more than any other form of communication, including face-to-face interactions with peers, parents and others in their community.

And the trend is only growing. In the last two years alone, teen use of screens (think smartphones, tablets, laptops, etc.) has increased five-fold. For an organization like The National Center for Outdoor & Adventure Education, these findings present both challenges and opportunities.

When grade schoolers and teens enroll in our adventure-based, outdoor education-focused backcountry courses, we inform them ahead of time that tablets and phones are not approved for use during backcountry travel. On the opportunity side of that equation, we find the same outcomes that researchers from UCLA recently did when they conducted an experiment that examined whether increasing opportunities for face-to-face interaction during an outdoor education program — while eliminating the use of screen-based media and communication tools — improved nonverbal emotion–cue recognition in preteens.

From a write up in The Wall Street Journal:

Researchers at the University of California, Los Angeles, wondered if all screen time might be affecting children’s ability to read emotions in others. To find out, they took advantage of a rustic science-education program, 70 miles east of L.A., which doesn’t permit students to use electronic devices.

That let the scientists assess two groups of about 50 sixth-graders, each from the same public school.One group was at the program for five days, while the other hadn’t yet attended. Both groups were tested on Monday and then again on Friday for their ability to detect emotions from people’s faces. In two tests, each given twice, the pupils looked at 48 still photos and 10 videos scrubbed of verbal content.

After five days without electronics, the campers had pulled way ahead in reading faces. The camp group reduced its errors on the still-photo test by nearly twice as much as did the control group. (That the control group had any reduction at all was likely due to the practice offered by the first test, the scientists said.) On the video test, the campers improved by nearly 20% while the non-campers showed no change.

These findings are very much in line with our own knowledge about the importance of in-person peer interaction as a learning process that leads to skill in understanding the emotions of others. It’s why the core curriculum in use here at NCOAE places so much emphasis on personal interactions, and why screens are not approved for use on our courses.