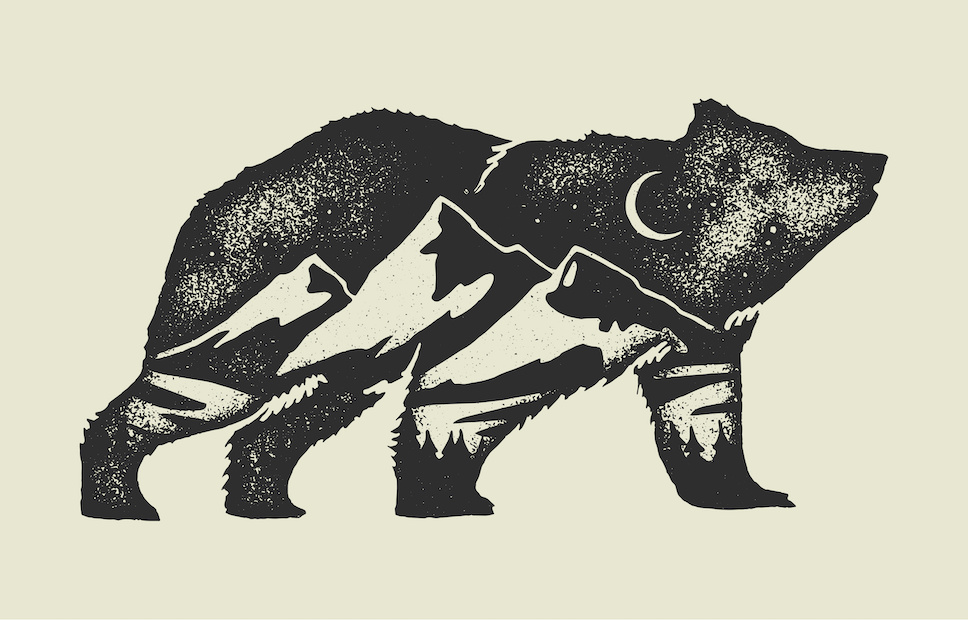 I repeated my previously approach of taking a peek while buried in my hammock. However this time the cracking continued, and I was able to pinpoint the location. It was coming from behind the tent occupied by my co-instructor.

I jumped out of the hammock and turned on my headlamp. Initially I saw nothing, so I turned off my light and waited.

I swung my light back into the darkness and clicked it on. Two glowing orbs, pretty far up from the ground, stared back at me.

I turned off my light. The darkness made the intruder invisible. Back on with the light and there were the eyes staring at me. Now the eyes started moving up and down checking me out. It occurred to me at that point that I was face to face with a bear that was sizing me up.

“Liz, there is a bear behind your tent,” I said loudly.

“Get out slowly and I’m going to scare it off.”

Then I yelled, “Bear in camp!”

The idea was to warn my fellow instructors, and to be loud in hopes of scaring off the bear.

It was a standoff for what seemed to be four or five minutes as Liz and I continued to vocally express our disapproval to the bear. Eventually, it lumbered off into the woods. Everyone sighed in relieve and we all went back to sleep.

Two hours later and the bear returned, putting us through the same drill of shouting at the bear. I added to the script of our yelling, asking the bear why it wanted to be such a pain in the buttocks at 3 in the morning.

Again the bear departed, only to return a third time so we could go through the experience again. This time Liz and I were just laughing at the bear. It was clear it wasn’t too concerned about our requests for it to leave.

The next morning, as we gathered our gear and were discussing the day’s plans, our resident bear walked back into camp, stopped briefly and stared in our direction. The look on its face let us know who’s spot this really was and that it was time for us to be on our way. And we watched as the bear shuffled off down the trail, unimpressed by our presence.

We finished packing our gear and moved to a different spot. The bear’s message was loud and clear: “Humans in camp!”

Editor’s Note: In our final installment next week, our author faces a big decision: Avoid a confrontation with a bear in a tree over the trail or ride his trail bike right under the bear and hope for the best.  In the meantime, if you missed Stephen’s first installment in this three-part series, read The Three Bears: Tales of Terror and Trepidation — Part 1 “The Shock.”

About the Author: Stephen Mullaney is the Director of School Partnerships at The National Center for Outdoor & Adventure Education (NCOAE). He has worked domestically and internationally with schools, organizations, and wilderness programs. His classrooms have ranged from dilapidated trailers at overcrowded, underfunded schools to the Himalayan mountains and everything imaginable in between. His past students include gang members/prisoners, education majors, college and university professors, and pioneers in the field out outdoor and adventure-based experiential education. Stephen’s philosophy is to focus on the development of positive working and learning environments. He brings more than a quarter of a century of education experience and understanding of human nature to any organization, whether it is an education institution or a private company. His writing has appeared in adventure sports/education journals, magazines and on the web. Stephen prefers to arrive by bicycle and sit in the dirt.

Let’s Add Humble to the 5 ‘Umbles’ of HypothermiaHands-on Training is the Key to a Career in the Outdoor IndustryNew Thinking about How to Handle Spinal Injuries in Remote Wilderness SettingsIn the Outdoor Industry, Affordable Housing for Outdoor Educators Remains ElusiveGaining the Clinical Experience to Get into Med School: EMT Training and Direct Patient Care