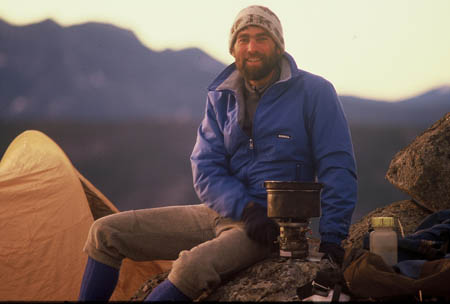 To those of us who have worked in the outdoor education field for 20 years or more — or who know the history of our practice and its people — the name Mark Udall rings a familiar sounding bell. Most people nowadays know Mark Udall as the senior U.S. Senator from Colorado whose family’s role in politics, especially in the western part of the United States, spans over 100 years.

But upon closer inspection, it’s not very difficult to tell that Udall is one of us, or said different, that that he used to be one of us and not in some slightly insignificant way. That’s because right there on his Wikipedia entry, Mark Udall lists Outward Bound instructor as his primary job title. We don’t know about you but we think that’s pretty cool and refreshing to see, especially when almost 50% of the members of Congress list “lawyer” as their occupation.

Why point this out? Because Rock & Ice magazine recently ran a profile of Udall in which the 6-foot 5-inch uber legislator calls our attention to the significant role outdoor education can play in our lives. You see, Udall used to run the Colorado Outward Bound School — as in, he was its executive director during one of the organization’s largest growth spurts — and now he’s one of the most powerful and influential people in the United States.

Have a look at what Mark Udall has to say about what he’s learned along the way, and how his career in outdoor education has helped make him the person he is today:

I’ve climbed Kangchenjunga in the Himalayas, the Cassin Ridge on Denali, Aconcagua via the Messner, and made it 26,000 feet up the White Limbo on Everest before a storm forced us to turn back. And I just met one of my biggest climbing goals this August — summiting Dallas Peak with my wife, Maggie — [to finish] the 100 highest peaks in Colorado, “the Colorado Centennials.”

MY GREATEST CLIMBING CHALLENGE also brought the greatest reward. Our journey up Kangchenjunga took three months, and I was the only member of our team to reach the summit. Those final 2,000 feet took me 26 hours, alone and without rest. Reaching the summit was a high point, in every sense of the word.

THE OUTDOORS has played a central role in shaping how I see the world, and a lot of that is thanks to my mother. She was a member of the NRA, a sharpshooter, a pilot, an angler and an equestrian. She was a native Coloradan and the one who lit the spark.

AS A YOUNGER MAN, I lived and worked in the mountains as the head of Colorado Outward Bound. That job — running a non-profit business that taught leadership and risk-taking — showed me a thing or two about the importance of innovation, entrepreneurship and teamwork.

MY PRIORITIES in the senate…

There’s a lot more to the Mark Udall profile, so please head over to Rock and Ice to read the rest. Just click on What I’ve Learned: Mark Udall to do exactly that.