We’re literally going to be looking upward in the next three posts here on the NCOAE blog, with tips for outdoor educators, wilderness guides, and outdoor recreation enthusiasts alike regarding the terrain overhead. We will be honing our outdoors skills by exploring the wilderness above our heads.

Today’s post (part one in the three-part series) suggests taking a close look at the night sky. And why would we want to do that? Because most of us in the outdoor and experiential education field are adept at tying knots; cooking over a campfire; and naming local rivers, rapids and mountain ranges. But when it comes to the landscape above our heads — the heavens, the clouds, and the winged wildlife — many of us remain slack jawed with wonder.

Imagine an evening in the backcountry with a group of students or adults, some of them seeing bright stars — unhampered by city lights — perhaps for the first time. At this point, you can point upward and say, “That isn’t just a beautiful sky. It’s way more than just that!”

By having everyone lay down, look up, and listen as you point out and describe the individual stars and constellations that your group can now clearly see because they are far from city lights, you’ve opened everyone’s field of vision to the space above our buildings and tree lines that’s often forgotten and/or taken for granted.

With just a little bit of research, you can pick up a wealth of “fun facts” about the night sky. For example, knowing where to find constellations and then sharing the stories that accompany these heavenly connect-the-dot starry clusters makes you even more authoritative and helpful than you already are.

And the stories behind the constellations are beautiful, cultural, and entertaining. Using the embedded video below, watch and listen to Neal deGrasse Tyson, astrophysicist, cosmologist, planetary scientist, author, and science communicator, as he describes the night sky.

The best place to start any chat about the constellations is with the Big Dipper, which is part of Ursa Major (Great Bear). It is comprised of seven stars, with three representing the handle overhead, connected to the remaining four stars to create a big square pot or pan. 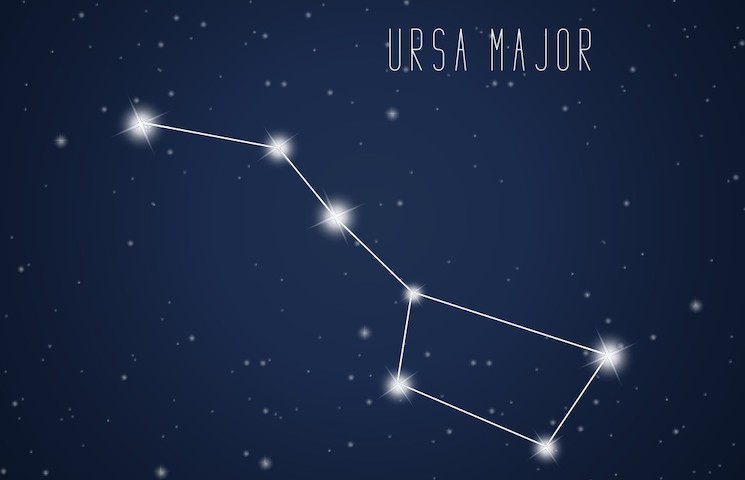 Runaway slaves were said to look up and use the constellation to find north and escape. They would find the star at the farthest edge of the “pan,” in the Big Dipper, and then follow their eyes to the first bright star past that far edge of the pan. That would be the North Star — also called Polaris — which, in truth, is only the 48th brightest star in the skies. But the North Star is the anchor of the sky, representing  hope and inspiration. It guides travelers toward destinations of purpose and freedom.

From this point, you can start moving your audience around the sky. Arcturus is the next star on our visual star trek. To find it, follow what is called the “arc to Arcturus.” That begins at the curve in the handle of the Big Dipper, extending that visual curve until your eyes land upon a bright orange star. 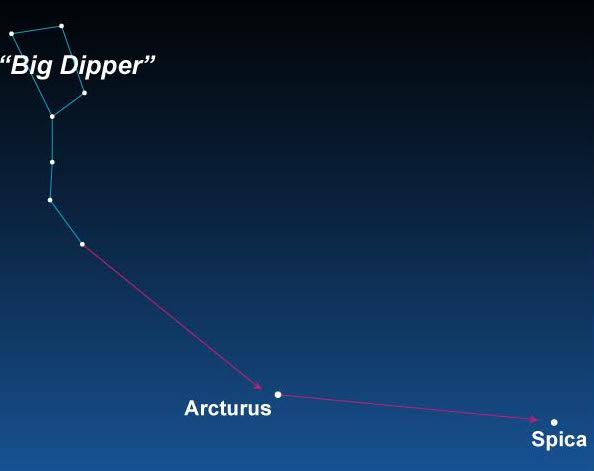 Voila! Arcturus — said to be the fourth-largest star in the night sky. Arcturus became a household name to science fiction buffs when it was mentioned in a variety of books and films ranging from Doctor Who, to Star Trek and Hitchhikers Guide to the Galaxy.

Another fun fact: Organizers of the 1933 Chicago World’s Fair thought it would be cool to use light from Arcturus to open the fair. Their thinking was that since Arcturus was 40 light years away, and since the last Chicago World’s Fair was in 1893, they could mark the anniversary in a special way. They passed the light through a telescope, which flipped a switch to officially light up the fair.

Unfortunately, it was later discovered that Arcturus is only 27 light years away from Earth, but nonetheless, it made for a fantastic fair debut.

Continuing our sky-high journey, let’s find Spica, the 15th brightest star in the sky, located in the southern constellation of Virgo. By extending the curve from Arcturus, the viewer will be led to Spica.

Spica, which is said to be brighter and hotter than our sun, is associated with Virgo, the goddess of the harvest, and represents the bundle of wheat that Virgo holds in her hand.

These short “travel stories” are among many that can be discovered and described in the evening on a guided outdoor adventure — something to share around a fire and add pleasure and information to any student’s memories. All it takes is one person on a trip with the skill to teach and tell these types of stories.

If you find yourself on a course with NCOAE, you will most likely take a night hike, sit around a fire, or paddle across a body of water illuminated by the night sky. By practicing finding the stars and constellations at home or in the field, you might be able to bring these stories to life for those around you.

Editor’s Note: The next installment of this three-part series will explore the basics of bird identification.